When people are on the market for a good quality scope or optic for their rifle, something they can sometimes forget about is that they also need an equally high-quality scope mount to go with that scope. In fact, it doesn’t really matter how high quality your scope is – if it doesn’t use the right kind of mount to attach it to the rifle, you won’t be able to make any kind of accurate or precise shots.

**Below are our more detailed reviews. Click the links above to see current prices or read customer reviews on Amazon.

In other words if you buy the incorrect mount for your scope, it will waste you time, money, and a lot of ammunition. It will only be after multiple bullets downrange that you realize that there is a problem. To avoid this problem early on, take the time and invest just as much effort into finding the best mount that you can as you would with your scope.

In this article, we are going to discuss the differences between the kinds of scope mounting systems in great detail and discuss four of the best scope mounts on the market.

It can be difficult to select the right mounting system for you based on all of the different types and models that are out there. However, practically all scope mounts fall into two categories: detachable and fixed. A detachable mounting system includes scope rings and bases, which allows you to swap out scopes between rifles very easily. While you can remove the scope from a fixed mount, it is much more difficult to do so and is primarily designed to be left there.

As far as materials are concerned, all rifle mounts currently available on the market are made with two kinds of material: aluminum and steel. Between the two, aluminum is by far the more lightweight, but on the flipside steel is stronger and more durable. If you want something that won’t add any weight to your rifle, aluminum is the way to go. Otherwise, if you want something a little stronger and are willing to put up with the extra weight, there’s no denying that steel is your best bet.

Two prime examples of a detachable mounting system would be the Weaver rails and the Picatinny rails. Weaver rails comprise of perpendicular slots in flat rails that correspond with weaver rings. The rails will run underneath the rings and fit right into the slots that you will find on the base. The purpose of scope rings, horizontal or vertical, is to ensure that there is a very tight fit when you place the scope against the rifle’s barrel. The rings themselves will be two pieces, with one half attached to the scope base and the other half attached to the bottom side of the scope, allowing it to be held securely. The size of your rings are dependent on the size of your scope. Find the best scope rings on the market here.

The base of the scope can be either a one piece or a two piece based, assuming that the base is not actually built into the gun itself.

Another advantage to dovetail mounts is their durability. Whereas some scope mounting systems are not designed for the heavier recoil of Magnum calibers, the dovetail mounts can easily absorb the recoil of these kinds of calibers without issue. The best thing about quick detachable (abbreviated as QD) scope mount when it comes to precision shooting is how you can remove the optic from the rifle and then reattach it later. Assuming you’ve reattached it at the exact same position that it originally was at, your rifle will still be sighted in. This means if you would like to alternate between open sight shooting and scope shooting for your AR-15, for example, you can easily do without having to re-sight in your rifle every time you remount the scope.

In addition, the best QD scope mounts are those that come with a riser, because you will almost certainly have to have one if the objective lens of your scope is over 34mm in diameter (which most are). You’ll also want to keep in mind the specific type of QD Mount that you will want as well. For example, do you want a complete base or would you be more satisfied with just having a couple of quick detachment rings?  Do you want rings that you can also mount other accessories on such as lights or lasers or do you just want the simply models? For tactical purposes at the very least, it may be very preferable to have an accessory on top of or on the side of your scope. 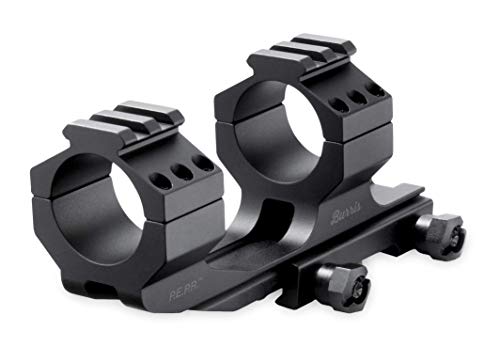 This is a one piece base scope mount that comes in two different variations: one with Picatinny tops and one without them. Between these two, the model with Picatinny rails will easily be the better choice for tactical situations because you can add lights, illuminators, lasers, and even a red dot. Beyond that, the Burris name is a well regarded one in the scope mounting world because of the quality that they are known to put out in their products. What’s more is that all of this is sold for under a $100. The Burris Quick Detach mount can be had for only around $90. 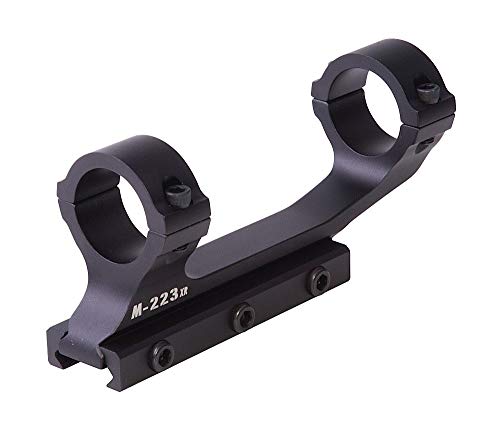 Nikon is known for making high quality scopes, but they also make excellent mounts for those scopes as well. The M-223 XR scope mount not only fits almost all flattop AR platforms, it also fits all Picatinny rails. What’s even more cool is how Nikon designed this mount to be specifically used for long range shooting with an AR rifle; that’s why a 20 MOA (minute of angle) inline is built in to maximize your elevation. Nikon has constructed this mount out of a durable, yet lightweight alloy that will withstand harsh conditions without drastically increasing the weight of your rifle. To find the best long range rifle scope on the market, read our review here.

It’s important to note the distinction between the Nikon XR mount models and the non-XR models. The major difference is that the XR model consists of three different parts (right base, left base, and center base) that all have to be aligned perfectly onto the rail with Allen bolts. In contrast to this, the non-XR variation consists of only one piece and can be secured with just two Allen bolts. 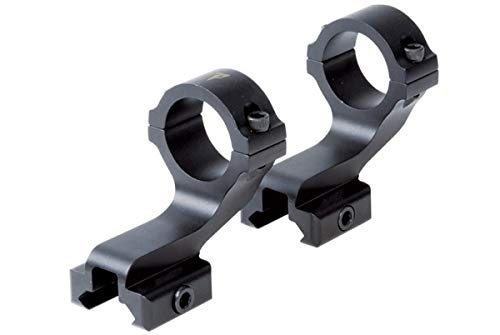 This is another versatile scope mount from Nikon that is also more inexpensive than the XR scope mount, coming in at only around the $50 price range. As with the M-223 XR mount, the P-series scope mount is built primarily for AR rifles. However, it will also fit on any flattop Picatinny rail for an MSR rifle and will also accept any ultra compact scope due to the two pieces design. What will stand out to you the most about the P-Series mount, visually speaking, is the forward positioning of the mount that is designed to give the shooter plenty of eye relief.

UTG One Pieces Quick Detachment Base With Rings 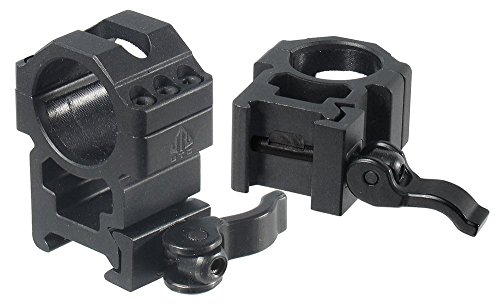 The UTG One Piece is almost identical in concept to the Burris One Piece that we talked about earlier in this article, but can be bought for less than half the price. The UTG One Piece features rings that are one-inch in diameter and are lined with a polymer tape that is intended to protect your scope. Something that you would have only expected on a higher priced scope mounting system are the Picatinny grooves that are lined on the top of the rings, allowing you to add more QD accessories. Last but not least, UTG has constructed their one piece scope mount of an aircraft grade aluminum so that it’s built equally as rugged as its higher priced competitors.

Best Way To Add Quick Release To Your Mounting System: 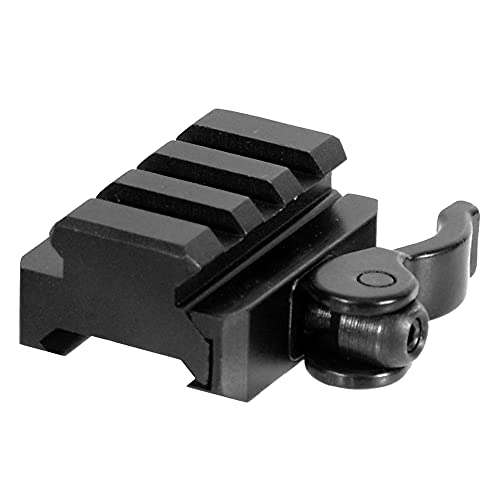 The Universal QD Adapter and Riser is constructed out of aluminum and then finished with black. It’s a perfect upgrade to any kind of tactical scope mounting system because there is no easier or cheaper way to add non-QD equipment to your QD attachments.

As you should be able to tell by this article, there are many different scope mounting systems out there. The best scope mounts for today’s modern world and tactical needs are the QD mounting systems, such as Picatinny or Weaver rails, that make your rifle more modular. Just remember to make sure that the dimensions of the rings and bases match up with the dimensions of your rails or else it will throw your accuracy off. The good news is that once you find the right scope mount for your needs, all that it takes at that point to become an accurate long range shooter is a lot of practice on the range.

Thank you for visiting Reloadingpresso.com. If our article has helped you make a decision about the best rifle scope for you, please click through to Amazon using one of our buy buttons. We are an Amazon Affiliate website and how we keep our website running is through the small commission we receive when you purchase a rifle scope from Amazon after visiting our site. There is no extra expense for you – the price is the same as if you went to Amazon directly. If you’re looking for more than just the best scope mounts, please review our Best Turret Reloading Press Buyers Guide and our Best Gun Safe Buyers Guide.